Opponents to Scajaquada redesign refuse to ‘call it a day’

RECONSTRUCTION OF THE SCAJAQUADA EXPRESSWAY IS SLATED TO START THIS SUMMER, BUT THAT HAS NOT SETTLED NEIGHBORHOOD VIEWS ON THE NEW YORK STATE DEPARTMENT OF TRANSPORTATION’S PLAN.

A crowded public meeting Wednesday night was generally opposed to the plan.

The meeting at Canisius College’s student center was sponsored by the Buffalo Olmsted Parks Conservancy and the Restore Our Community Coalition, both groups fighting for changes in the Scajaquada and the Kensington Expressway.

The DOT has $104 million to make major changes in the road and has completed a series of design plans, based upon public feedback. As the latest state plan will potentially require turning parkland into more roadway, the opposition is organizing. Olmsted Executive Director Stephanie Crockatt maintains it is a bad plan.

“We’re still walking about the same width, even probably more width of the park,” Crockatt said. “They’ve actually talked about having to expand the right of way into the park, which means taking about 14 more acres of parkland. The intersections that they are planning are massive. The one for Agassiz Circle and Parkside is even bigger than what’s there now. It equates to about what’s at Sheridan Drive and Niagara Falls Boulevard.” 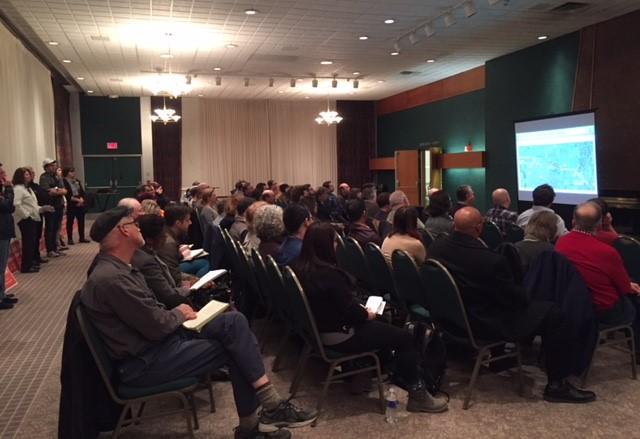 There is also a major road expansion where the expressway crosses Delaware Avenue. Crockatt said she is hoping the DOT comes back to the table instead of doing a “my way or the highway” approach. She said there has not been a response from the DOT about Olmsted’s alternative plan, which does not include paving over more of Delaware Park.

“We’re not asking for the road to be completely gone,” she said. “I think there are a few purists that would be like, ‘Yes, let’s get rid of the whole thing.’ But there always was a method of transportation through the parks. It was for carriages. It was for horses, bikes, pedestrians, not cars. But it still serviced to get people through the park. We don’t want it to go all the way back to 1868.”

“It’s been a long process for me as commissioner,” said DOT Commissioner Matthew Driscoll in August after presenting what it said was its final design. “It’s been a little over two years. I pledged two years ago in this room that we would bring this to fruition and we’re going to and we hope the community embraces it. If they don’t, we will leave the short-term traffic calming elements in place and we’ll call it a day.”